My 5 favorite places in the world

As ambitious as I may be, I have yet to see the whole world. (I know; someday.) In fact, when it comes down to it, I’ve probably seen about 2% or less. I’ve done a fair share of traveling for a 25-year-old with no trust fund, but the world is gigundo. Like, monstro status. When people ask where my favorite place in the world is, I can only select from the teeny pool of where I’ve been.

Still, I have my favorites in that pool. And because of the Booked.net – Top Destinations to Go There campaign, I am inspired to share them here with you.

What are your favorite places? 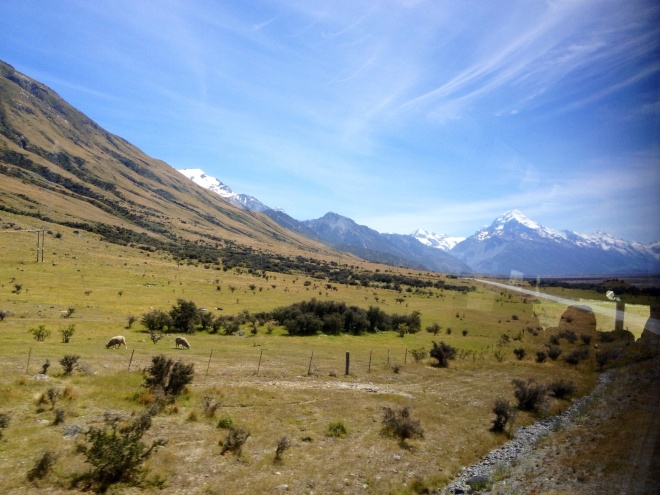 1. New Zealand
I know, it’s an entire country. I feel like I should pick smaller places, but I visited so much of this one. And yet, it stands taller and mightier than any other place on the planet for me (so far) because it was just that amazing. I visited this gorgeous country a year and a half ago, and I still dream about my return. From the shocking kindness of the people; to the just-as-shocking beauty of the rugged, untouched landscapes; to the easy pace of life and general air of happiness, New Zealand is about as close to perfect as a traveler can get. Most of my time was spent hiking, drooling out the bus windows at aquamarine lakes and white-capped mountains, and chatting with new friends from England (all of whom I still consider friends.) Plus, I climbed a live volcano here. And lived. You don’t forget that very quickly. 2. Australia
Jumping over to number one’s western mate, the good ol’ land down undah is my next favorite. It’s much more wild, multi-cultural, and bustling than its Lord of the Rings-inspiring neighbor, but it holds up in its own way. My days here were never the same: I played the didgeridoo for a courtyard full of laughing guys and won free beer, survived a spider bite in the rainforest, snorkeled with Nemo on the Reef (and got stung by a jellyfish), hiked along miles of intoxicating coastal trails while discussing American politics with a new German friend, and stared at the single most beautiful sunset I have ever seen while standing at one of the most southerly points of land on the planet. Yeah, Australia was awesome. 3. Prague, Czech Republic
I think I’m in the minority here, but I love Prague. Not the tourist-trap, gimmicky Westernized Prague: the cobblestone alleyways that hid tiny pubs and cafes. The old men who swung tankards of frothing pivo and sang their national anthem with such pride, such jubilance that you forgave their drunken off-key warbling. The tiny, one-keg beer hall buried beneath the main street in an old bomb shelter. The sparkling Vltava river and its golden-drenched waters when the sun sets behind Petrin Hill. And the fact that despite its long, troubled past, its centuries of darkness spent beneath the Communist thumb, Prague celebrates the newfound Czech independence and freedom with a joy that is evident in every local’s smile. 4. The Netherlands
I have a soft spot for the Dutch. I dated one for five years, visited the country over a dozen times in that period, and lived and worked there toward the end of it. Amsterdam is crazy, unique, and incredible; the sweeping countryside is lovely in both summer and winter; and the quality of life is one of the best in the world. I miss frikadel and frites (but not the mayonnaise), stroopwafels and pankoeken. I miss the city parks, bicycles everywhere you turn, and the rambunctious, wild parties on New Year’s Eve. But I try not to mourn too much, because I know I’ll go back someday soon. After all, I have yet to see a live tulip in a Dutch field. 5. London, England
I know, I know, what a cliche, right? But seriously, who can dislike this vibrant, cultural, beautiful city? It is modern and historic at the same time, filled with a delightful paradox of traditional and unconventional style. I cried when I first saw Big Ben. No, really. Granted, this was my first step outside America, and I had been smitten by British culture since I was probably 9 years old. (I sat on the steps of St. Paul’s and sang Tuppence A Bag, and no one was going to stop me.) But I’ll never forget that moment I first saw the clock tower, because I had both chills and the most unearthly warmth crawl up my spine at the same time. It was the moment I realized I was standing on another land, on soil that was thousands of miles from home. There was a giant ocean between us that I had finally crossed. And from that point on, there was no going back. I was a born traveler.

I hope to have added to, and possibly changed, this list in the next five years. Bring on new adventures! Until then, I nominate Erica and Shaun from Over Yonderlust, Matt from Nomadic Matt, Kiersten from The Blonde Abroad, Angie from Angie Away, and Travis from Gogobot to share their top five places on Earth. Go for it – you might win an iPhone 6!